The Eastern Surfing Association kicked off its 2021 tour of post-season championship events last weekend at Paradise Beach Park in Melbourne Beach, Florida located on Florida’s Space Coast. Presented by Florida’s Space Coast and Surfer Dudes, the ESA 2021 Southeast Regional Surfing Championship was the first out of three events that the organization runs each spring as qualifiers for its Easterns® event held every September in North Carolina.

“We were so happy to be back in Florida after all three ESA regional events were cancelled in 2020,” said ESA executive director Michelle Sommers. “Everyone was extremely thankful to be back in a jersey and reconnecting with friends from all over the state of Florida and Georgia.”

The weather and waves cooperated all weekend providing warm, sunny days with mostly offshore winds and clean, contestable surf throughout the event. Event sponsor Pepsi provided cases of water and Long Doggers offered up amazing lunches for the entire staff and volunteers. 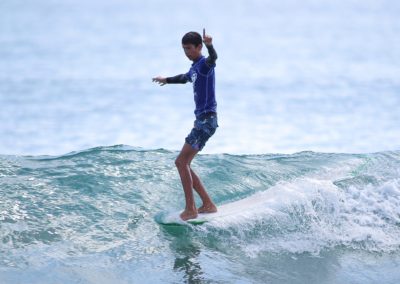 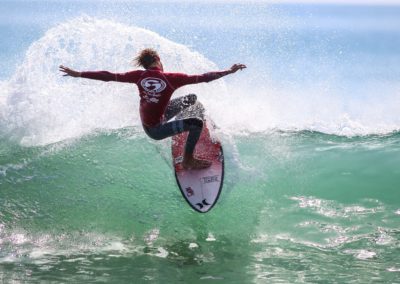 ESA CFL’s Logan Radd in one of many heats he surfed in the ESA’s 2021 Southeast Regionals. Photo: Bernie Walls/OC Sports Nut

Local ESA Central Florida’s Logan Radd won top honors by claiming the event Iron Man and Hot Wave awards. Radd put on an air show for the crowd which helped him take home first in the Junior Men U18 division.”

“I am stoked about my ESA Southeast Regionals finish,” said Radd. “I have worked super hard to be able to surf in all wave conditions. Winning U18 means so much, but obtaining the highest-scoring wave of the contest means so much more.”

This was the first ESA championship event that offered Open Longboard after the organization introduced this division in its local districts during the 2020 season. Just like the ESA’s Open Shortboard Divisions, Open Longboard allows men and women of all ages to compete against each other.
ESA Central Florida’s Gavin Idone, was crowned as the very first ESA Southeast Open Longboard Champion. Idone also won the Junior Men Longboard Division. ESA’s All-Star Coach Jason Motes took second, as well as fourth in the Open Shortboard where he surfed against three former ESA All-Star Team members.

“Surfing against Carl, Logan and Braeden in that final was the highlight of this event,” said Motes. “I am so proud of each of them and stoked to have made it into a final heat with so much surfing talent.”

The ESA’s Championship Tour continues this week with its Mid-Atlantic Regionals presented by The Outer Banks Visitors Bureau and Surfer Dudes. Starting Friday at Jennette’s Pier and running through Sunday, competitors from South Carolina through Virginia will be competing for their own championship titles.

Be sure to watch live at www.surfesa.org beginning April 30 at 7am. 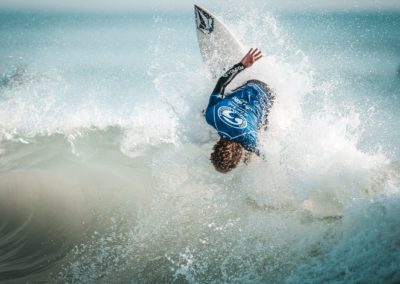