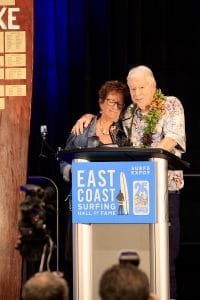 ORLANDO, FLORIDA – Former Executive Director of the Eastern Surfing Association (ESA) and longtime Ocean City resident Kathy Phillips was recently honored by the surfing community when she was were inducted into the East Coast Surfing Hall of Fame (ECSHOF) on January 5 in Orlando, Florida during the 25th annual ECSHOF Induction Ceremony.

The East Coast Surfing Hall of Fame began in 1996 by East Coast surfing legend and ESA co-founder Cecil Lear and international surfing legend Greg Noll.  The organization is an independent, non-profit educational institution created to honor and memorialize the pioneers, legends, champions and individuals who, through their passion and dedication, have made outstanding and significant contributions to the development and recognition of Surfing on the East Coast of the USA.

Phillips, who had previously been inducted into the East Coast Surfing Hall of Fame Class of 2004 for her tireless work advocating on behalf of East Coast surfing at the national and international level, was honored last week with the 2022 ECSHOF Cecil Lear President’s Award. 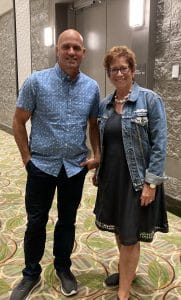 Kathy Phillips with 11-time world champion Kelly Slater, who was in attendence of the 25th anniversary of the East Coast Surfing Hall of Fame. Photo: ESA file

Recipients of the Cecil Lear President’s Award are selected by the ECSHOF Board of Directors and awarded to an individual who has made a lasting contribution in leadership or mentoring to East Coast Surfing.  Cecil Lear, in introducing Phillips noted, “I’m thrilled to present The Presidents Award for only the second time, and to see it go to Kathy Phillips. Through her leadership and administrative skills, the ESA grew to be the largest surfing organization in the world, a competitive powerhouse and an environmental and beach access advocate up and down the East Coast.”

“I feel privileged to have been a blip in the timeline of East Coast surfing,” Phillips said during her acceptance speech.  “And honored to have worked with such an incredible community of people who have given their time and love to the sport of East Coast Surfing.”

Phillips has been at the forefront of competitive surfing on the East Coast for decades. She, and her husband Jeff, were volunteer ESA district directors who ran the Delmarva District of the ESA from 1979 to 2004.  She then accepted the role of Executive Director of the ESA from 1990 to 2005.  Phillips also served on the US Surfing Federation Board of Directors, the Pan American Surfing Association Board of Directors and helped to form today’s US Olympic National Governing Body of Surfing, USA Surfing.